Why $400 of groceries made me feel safe 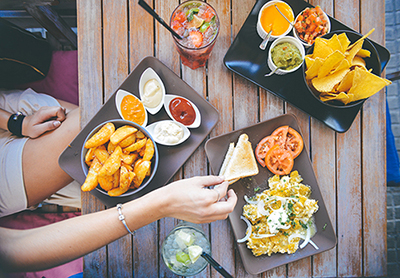 I remember like it was yesterday. I was leaving the grocery store, which was honestly a living torture chamber for me because the word Kroger freaked me out. Really, any grocery store for that matter because it created an immense amount of fear and anxiety. Why? Because I knew I had to walk in there and make choices. Choices that felt so foreign to me and I didn’t have a clue where to start.

See, for a long time I was a restricter. A restricter that had her safe foods that included a whopping 5.

That was it. Maybe an apple here and there and possibly a stick or two of artificial crab meat because the caloric density was jack squat. I remember feeling happy about that and I remember putting it on iceberg lettuce.

Those memories feel so fresh in my mind-I was leaving the store heading to my outpatient program in Atlanta, Ga. I had been going for over 6 months now and the entire staff knew me by name which made me feel special. The co-director of the facility really took to me and I believe felt my pain underneath all my food and compulsions that surrounded me.

I told him I had $400 worth of groceries in my car because I was afraid of running out.

Mind you, it’s dead heat in the summer time so anything worth salvaging was short lived. He asked that we go to my car together to see what all I had purchased. I felt embarrassed and apprehensive but I still gathered my keys and we walked out together. I opened my trunk and he saw them. Bags upon bags of bars, meat, crackers, cereals, ice cream, frozen dinners…..You name it, and it was probably there.

“Okay, so Kim, what all do we have here?” Trying to look unaltered as he was beginning to pull out some of the items in the bags.

“Well, I was so overwhelmed at the store and didn’t know what to buy so I kinda grabbed it all.” I said.

“So let’s talk about this” as he was reviewing one of many boxes of crackers I had purchased. “why did you need this one when you bought, let’s see, 4 others?”

“Like I said, I couldn’t decide. I wanted them all and there wasn’t one in particular that I could decide on. I’m not used to having so much food to choose from. I felt dazed and speechless when seeing all of the new options in front of me.”

Then I started to cry. I felt so stuck, so fearful, so full of confusion and completely helpless. He put his arm around me and promised everything was going to be okay.

He asked that we grab all the bags together and bring them inside. I don’t know why I remember this exact memory, but I remember him asking why I had raw fish in the trunk when it was so hot out. I told him fish was one of my safe foods so I had to get that in addition to something that I considered more risky. Like crackers for example. He nodded his head and told me it was best I threw it away. I agreed.

When we walked into the facility with our arms laden with plastic he told me to head to the kitchen. He then looked at me and said, “Kim, you don’t need food to feel safe. The only thing you need to feel safe is yourself.” At that time that statement didn’t resonate with me but now it makes me cry. I’m crying because I think at how far I’ve come on my journey. I want my words to spill out onto my computer and reach all of you that are still suffering. I want more people to know they aren’t alone in this battle. That it gets easier. That there are days where it sucks so bad you don’t understand why you feel this way but please don’t give up.

The reason why I wanted to share this story is because there is no such thing as a perfect meal, a perfect diet, a perfect whatever. That’s bullshit and it makes me angry even saying the word because I’ve worked so hard to remove it from my vocabulary.

I want you to know you’re not alone in your journey. I cannot tell you the amount of times I cried over what to eat, what was acceptable to my trainer at the time, (which is for a whole other blog), or what I was supposed to give my body because I didn’t know. I didn’t know what I was supposed to feed myself. Wow. There were so many choices and options to choose from. Coming from someone who spent years only eating specific “safe” foods that’s like me telling someone who just won 5 million dollars to shop away when they come from 5 cents.

How many of you have felt that way? Where you feel that you have to stay in your “safety” zone because you’re afraid of the outcome? Where there is so much worry and fear of the unknown? Feelings of utter paranoia where you seriously feel like you’re losing your f’ing mind?

I’m here to tell you it gets better, I promise. When we can begin to peel back on those tiny pieces of ourselves, there’s less fear when we sit on those emotions and deal with them. It has nothing to do with the food. It never has and it never will. It’s okay to feel scared, helpless, fearful, and judged, it’s normal and part of being human. I’m here to tell you that you’re not alone. If you need the help ask for it, surround yourself with a positive support system and don’t be afraid to share your feelings. They’re worth it. And most importantly, SO ARE YOU.

To gain more insights on food, fitness and mindset make sure to subscribe to my weekly email list at www.kimschaper.com